Stretch film containment force (What you need to know)

The key to safe shipping 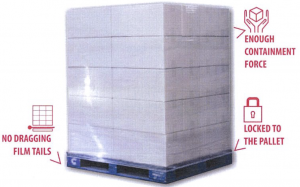 Understanding the ABCs of pallet loads

Figuring out what type of pallet load profile you typically wrap is as easy as A B C. Pallets can be loaded in a seemingly infinite number of ways. Usually, you're not just wrapping one type of pallet profile. Product positioning on a pallet change horizontally and vertically from pallet to pallet. Depending on the horizontal and vertical edge profiles, a different stretch film may be needed. Knowing the difference between these profiles will help determine the right stretch film for you. 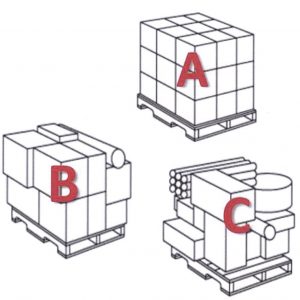 A loads have uniform horizontal and vertical edge profiles. The pallet's footprint is usually the same size as the pallet deck. A pallet load profiles look the most like a perfect square. They may have a few edges that can pierce the stretch film, but these are the easiest loads to wrap and contain correctly.

B loads don't have the same uniform shape as typical A loads. The pattern can be irregular, making it more difficult to wrap and contain. You may have boxes sticking out farther than the pallet deck. You'll have more than the regular sides sticking out towards the stretch film. You may have some objects sticking way out on one side, but more uniform on the opposite.

C loads are the most irregular of the bunch and can vary from pallet to pallet. No two C loads are a like. There will be horizontal and vertical edges that are more pronounced than those of the other pallet loads. These sharp edges that stick way out may require more stretch finesse and a higher quality of stretch film. These types of loads are the most difficult to correctly wrap and require more attention to the stretch film containment force.

More: The Basics of Stretch Wrap

There's a familiar misunderstanding with stretch film that the thicker the gauge, the stronger the film. Well, that just doesn't stand true anymore. It may have back in the day, but with the engineered films of today we have different ways of looking at loads. Here are some basic load containment recommendations based on load weight.

These are just general recommendations, remember to talk to a packaging specialist to help walk you through proper containment force numbers.

Fill out this stretch film form to help us find the right film for you.

More: The Basics of Pallet Containment

Know that you're well-versed in the art of stretch film containment force, let's look at how you know what film is right for you.

Rite-Gauging: The quickest way to improve product protection. Figuring out what stretch film should be used and how much can be tricky. Luckily with rite-gauging, we're able to show you real cost-savings of moving to a better stretch film for your application. Right-gauging is simply the act of using the right amount of stretch film applied properly, to wrap your pallet loads. Remember, each application is different so what may work for one company may not work for the other.

Down-gauging provides a cost-savings to you while maintaining the structural integrity of the load. When you down-gauge your stretch film you're moving from your current gauge of film to a lower gauge. Using pre-stretch film and engineered films, we're able to save you money on a lower gauge film without losing load safety. If you could save roughly 17% just by down-gauging to another film, it'd seem like a no-brainer right? All it takes is a simple conversation with us and we can walk you through the process. 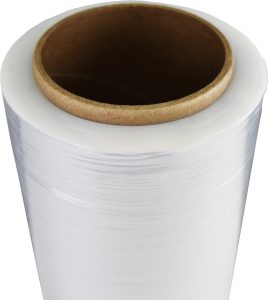 This film helps reduce the following; the neck down effect, the amount of wrap used, amount of damaged rolls, and safety hazards.

You've read about the benefits of using the right amount of stretch film containment force and safely protecting loads. The last thing to do now is help us know a little more about your operation. It's time to get specific to you.

Using this form, let us know about your stretch film process. With that information, we'll be able to find a cost-effective film solution for your applications.