Stretch Film Today and Keys to Wrap for Success

Quality assurance and miscues can occur with high demands and increased pressure fringing on sending people what they need quickly in this ever growing technical age. Therefore by knowing the correct way to safely secure products by the correct processes of stretch film wrapping, peace of mind can set in soon as the products have left the warehouse:

A recent study done by Sigma Stretch Film, the leading manufacturers of industrial stretch film in North Amaerica, explains the importance and care that should be given when film wrapping.  The study also concludes that the market for stretch film wrapping is forecasted to be competitive and the quality of film to be at its capstone.  On July 31st, in support of these conclusions, Sigma Stretch Film announced the opening of their Packworx facility to both train sales teams on the importance of value-added selling and to assist and develop solutions for customers with difficult applications.

The market for stretch film wrapping currently is quite inquiring. Polyethylene resin erosion has faded. However, the polyethylene market is looking to be narrow due to 3 major sources or “Crackers” being off line. Domestic and export demand is up along with polyethylene increase projected by 4th quarter.

Innovation of film wrapping is occurring and is setting a tone for the future. The idea of pre-stretched hand film has revolutionized the process of film wrapping. The idea is simple but is greatly effective. It is just simply hand film that has been stretched and then rebounded on a core. It allows for very light rolls with high strength and dynamic tension. When properly applied the stretch film has built-in memory to increase the containment force.

Stretch film wrapping may seem easy to most but many people seem to skip the proper basic processes that create a flawless wrap:

Another important factor when stretch wrapping is to know how to notice the good and bad attributes in the wrapping process and in the stretch wrap itself. First off it is important to know what a good break in film looks like. An ultimate break is what needs to be achieved. An ultimate break is a straight line break with pointed edges. The break occurs when the film has been pre-stretched beyond its limits. 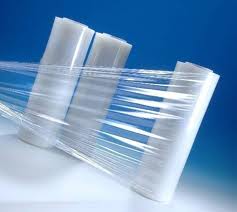 However, straight line breaks do not always occur. Several flaws can occur during the wrapping process:

Bad Edges: A common flaw occurs when the film has bad edges. When the film has nicks or flaws in its edges it can cause a tear from one edge through the film. This then creates a diagonal break. The machine can also cause tattered edges, which is why during the loading process the film needs to be precisely set.

Gels: Gels can also be a major issue for having a clean break. Gels are unmelted plastic in the film that can cause breaks in the center of the film. It then creates a diagonal break point from the gel point.

Die Lines: Die lines are unintended thick or thin spots through an entire roll of film. They are caused by plastic not being pushed through die evenly. It makes film inconsistent and causes premature tear.

Keys to Proper Containment of Products

Why failures in Containment occur

Load Containment: The film’s ability to unitize the load and maintain the load’s integrity.  Load containment is measured using the force to load test.

Force to load: The amount of force the film exerts on the load to maintain its integrity.  This is extremely important when down-gauging. This measurement will show that the load integrity is just as good, as or better than it was before.

Force-to-Load Stretch:  The amount film stretches as it is applied to the load.  This figure may deviate from the equipment’s pre-stretch.  Factors such as equipment settings and film composition affect the “on pallet” stretch.