The store will not work correctly in the case when cookies are disabled.

A Dunnage air bag is a poly bladder surrounded by numerous plys of paper, equipped with an inflation valve, and is used to minimize front-to-back load shifting in tractor sales, railcars, and overseas containers. 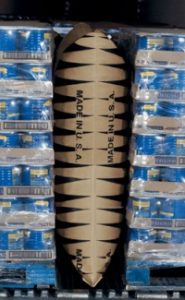 Compacting or positioning the lading

Compacting and positioning takes place during dunnage air bag inflation. The air bag surface pushes uniformly out against the load. As the air pressure increases, it overcomes frictional forces, eliminating small voids remaining in the load. No matter how tightly a load is positioned, either by fork truck or by hand, a build-up of small voids will remain. These voids are eliminated by air bag compacting/positioning. 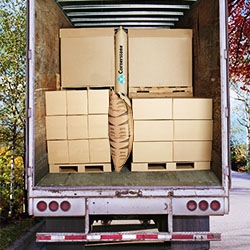 The second characteristic of air bag bracing is the cushioning that occurs during impact. For example, when a railcar is humped, the compacted lading in the front half acts as one unit rather than individual units which can slam into one another. The rear half of the load is cushioned by squeezing the air bag, increasing its internal air pressure, until equalization of forces occurs. The cushioning effect diminishes the shock of impact. 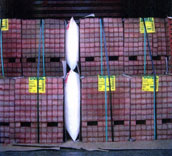 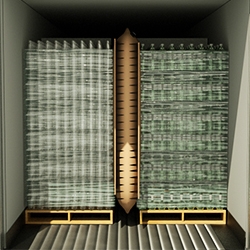 Enlarging the void size after inflation

The fourth characteristic of air bag bracing is its ability to fill an increased void as the lading settles. Even with rigid products, which have been tightly loaded, settling takes place. In-transit vibration causes the lading to loosen. With other types of bracing, constant pressure cannot be exerted on the load. Air bags have the ability to expand, thus maintaining somewhat reduced but continuous pressure.

The following chart breaks down the air bag type needed for mode of transportation used: