When you're shipping something delicate, it's critical that you're using the right cushioning system; it's time to consider a foam-in-place system.

A major East Coast wholesaler of high end tile, stone, and decorative metal was experiencing significant damage to its small quantity shipments. Frequently asked to send sample or replacement tiles to retailers, contractors, and consumers, the company relied on an air cushioning system coupled with expanded polystyrene (EPS) to protect as many as 350 shipments per day.

The air cushioning would be wrapped five to six times around the tile, burning through material and making the process labor intensive. In many instances, EPS would also have to be used as a void filler to stabilize the load. 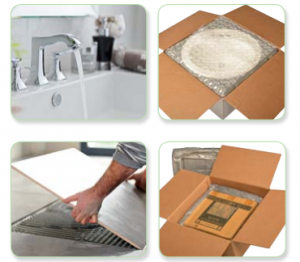 "Sometimes the difference in keeping and losing a customer comes down to a better foam-in-place system."

The fragile nature of the tile makes them highly susceptible to breakage during transit if not properly protected. And their sharp corners had a tendency to puncture the air cushioning cells, causing them to fail. Further, the weight of the tile, assisted by a shifting, vibrating load would end up crushing some of the EPS which would magnify the issue at the receiving end.

Air cushioning and EPS failure resulted in a high percentage of shipments arriving with one or more tiles broken, meaning, not only was the company dealing with replacements, their reputation and future ordering potential were also negatively impacted. More inventory, additional packing materials, and extra postage were consumed when the order was resent.

As a customer of IPS Packaging, the tile distributor had a dedicated Account Manager who saw a unique opportunity to present a foam‐in‐place system as a viable solution to the company's ongoing damage problem.  With the expertise of a dedicated Product Specialist with a specialization in foam-in-place packaging systems, the Account Manager was able to present the foam-in-place system as one that could reduce their damage issues and their rework costs, while improving their efficiency and their brand image.

Not having ever heard of the foam-in-place system, the tile distributor was intrigued with the potential benefits and agreed to a trial period with a system on one of its smaller lines.  After only a few weeks, the company began sending IPS Packaging extremely positive feedback about the system's ease‐of‐use and after several months, the company could prove that its shipment damage had gone down to virtually zero. They ordered a second system to integrate into their higher volume line at the same facility.

Most of their sample shipments fit into one of three case sizes. They were able to easily figure out how to create presets for the six bag sizes which would accommodate all of their needs. In use, the company places a customized, filled bag on the bottom and top of the load. (For the larger box, bags are also placed on the side.) The tiles are completely enveloped providing both load stabilization and cushioning without the need of excessive materials with the potential to pop and deflate during transit.

This was the fourth tile company that IPS Packaging converted to a foam-in-place system because it provides an ideal solution for companies in a market whose higher‐end, fragile products are susceptible to damage during transport.